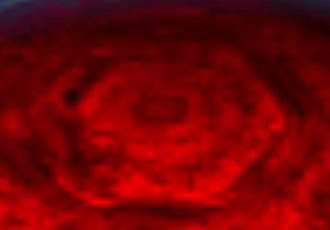 . . . "This is a very strange feature, lying in a precise geometric fashion with six nearly equally straight sides," said Kevin Baines, atmospheric expert and member of Cassini's visual and infrared mapping spectrometer team at NASA's Jet Propulsion Laboratory, Pasadena, Calif. "We've never seen anything like this on any other planet. Indeed, Saturn's thick atmosphere where circularly-shaped waves and convective cells dominate is perhaps the last place you'd expect to see such a six-sided geometric figure, yet there it is."

The hexagon is similar to Earth's polar vortex, which has winds blowing in a circular pattern around the polar region. On Saturn, the vortex has a hexagonal rather than circular shape. The hexagon is nearly 25,000 kilometers (15,000 miles) across. Nearly four Earths could fit inside it.

Check this exclusive never-before seen footage of Claire's baby going through the Young Carl brainwash treatment while he was kidnapped a few seasons back. This was apparently cut for decency's sake, and for good reason. It's just a baby, man. Just a baby.
Posted by Mr. Babylon, 8:15 AM | link | (0) comments

A New Refutation of Time and Space.

Claire has a hard time getting comfortable with the Supreme Court all up in her uterus.

This and this have gotta be LOST affiliated, right? Otherwise...

It's Always Sunny on the Island

Except when something bad happens; then it rains every time.
Posted by Mr. Babylon, 8:15 AM | link | (0) comments

Remix better than the OG

Turns out that video posted below isn't new after all, not by internet standards at least. it's known as the Sri Lanka Video, and it came out piece by piece as part of one of those online LOST role-playing alternate reality fake website follow the clues things that I skipped out on this summer whilst travelling around checking out real-life mysterious islands.

Looks like I missed out, though, because that Sri Lanka video (up until the unintentionally comical chase at the end) is more interesting than anything we've seen yet this season on the actual television show.
Posted by Mr. Babylon, 8:15 PM | link | (0) comments

There's too many of us


Another week, another song from Repo Man. Oh yeah, new(?) DHARMA/Hanso video too...

Normally I'd be a little salty at this guy over the pointless negativity of his "Why Lost Sucks" blog, but dude is also the man behind this magical spot (where despite the bitching, hope springs eternal,) and it's not in me to ever speak ill of a true supporter of the A.

So instead of a "you mad, doggie?" admonishment, I'll simply say, "do you, homie, and update that Lost blog while you're at it. You aren't even through Season 2 yet."

While the unexplained appearance of this Creepy Little Girl™ in the promotional flicks for last week's season premier might lead some to believe the episode was secretly guest directed by M. Night Shyamalan, it wasn't.

Looking for the joke

Just in case you're a little short on *buck!* for Wednesday, don't worry, systemD128--the genius who gave us this--offers up a little help in the form of this "Let's Go!(Lost Mix)Say Whut." 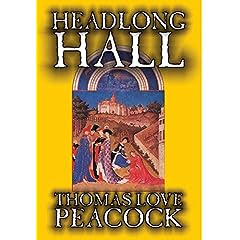 "The place is quite a wilderness," said Squire Headlong: "for, during the latter part of my father's life, while I was finishing my education, he troubled himself about nothing but the cellar, and suffered everything else to go to rack and ruin. A mere wilderness, as you see, even now in December; but in summer a complete nursery of briers, a forest of thistles, a plantation of nettles, without any livestock but goats, that have eaten up all the bark of the trees. Here you see is the pedestal of a statue, with only half a leg and four toes remaining: there were many here once.